News
You are here: Home / News

Peninsula Aero Club has a proud tradition of supporting local community service clubs from the proceeds of our air shows. The 2020 Airshow is no different with our major beneficiary to be announced shortly.

The club will also be supporting the Tyabb CFA, a vital service for all of us, the Mt Eliza Lions Club which exists to support the community through a variety of initiatives and the Tyabb Football & Cricket Clubs which serve our youth.

Peninsula Aero Club takes great pleasure in presenting the 2020 Air Show. This is one of Australia’s truly great air shows and is only around 30 mins flying time from Lilydale Airport.

Check out www.tyabbairshow.com to read all about this years show.

At the last committee meeting it was discussed what would be the best way for LFC to contribute to the recovery of towns and businesses in the bushfire-effected areas of Victoria. In the end the decision was made that we could simply do what LFC does best: fly to regional areas and spend money there. Consequently we have tentative plans to fly down to Mallacoota for lunch very soon. This could be a day trip or if people wanted to stay overnight, even better. At this stage we have no dates as Mallacoota Airport is still closed to all but the ADF, emergency services and selected relief flight. We will stay in contact with the authorities down there and let you know as soon as the airport is open to the public again.

Right now, we are asking members to put forward their names if they are interested in making this trip. We need a handle on numbers so we can make sure the town would be capable of dealing with the size of the group. If you’re up for this, please send an e-mail to Steve Hitchen hitchy@iinet.net.au soonest.

After start delayed by one day due to weather worthy of the depths of winter, 20 people in eight planes traversed the state from Melbourne to Gawler for the LFC cup weekend fly-away. Five planes left from Lilydale, two from Moorabbin and one from Penfield Airport in Sunbury.

Basing ourselves in Angaston with four cars as transport, we spent the weekend taking in the delights of what is perhaps Australia’s premier wine-growing region. Great wine, great food, great scenery and great company. That’s what fly-aways are all about!

Lilydale Flying Club is once again taking memberships renewals! We have had a sabbatical on membership fees whilst we came up with a better option for banking. Now that has been sorted out we are once again in a position for people to start renewing their memberships.

All memberships are due as of 1 October 2020, and will run for one year. Once again, membership for your whole family is just $30.

The funds will put us on a good footing for future projects that the committee is currently working on and is considering the feedback given to us via the recent member survey. More details on that very soon.

To renew your membership, simply click on the link below and you will be registered as a member and given details of how to transfer the money to the LFC bank account. NOTE: at this time there is no mechanism for paying LFC membership over the counter at the flying school.

It’s time to speak up! Lilydale Flying Club is a social club founded in 2014 to further friendship, run social activities and encourage knowledge-sharing and experiences among Lilydale Airport’s aviators.

Now we need to hear what you think about the club and its directions. This is a short 10-question survey to get feedback from members and other interested parties so we can strive to be a better club.

Please take the time to run through these questions before 31 August. The club committee needs to know what the membership wants from the club and how the club can enhance members’ aviation experience.

Click on this link and tell us your thoughts as soon as you can.

It’s on again! The legendary Lilydale Flying Club Trivia Night is back. We’re back at Atticus Wine Bar in Yarra Glen on 31 August to decide the club trivia kings. The pride of winning this prestigious event is once again your team’s for the taking. There’ll be scintillating conversation, food, wine and beer, fun times and somewhere in the midst of all that will be a trivia competition. Does you team have what it takes to claim bragging rights for the next year? Download the flyer below, then get your team registered via our on-line registration systems at this site: https://bit.ly/2xPyjkI

Don’t you ever let a chance go by.

Tony Collett was awarded the very first Marjy Grosvenor Award at the 2019 Lilydale Airport Winter Dinner on Saturday night. Tony was the driving force behind the 2018 Funflight event and his effort and dedication ensured it was a successful event. Russ Grosvenor presented Tony with the award in front of a gathering of 74 people at Fergusson Winery in Dixon’s Creek.

Winter is really not that far away now and consequently neither is the annual Lilydale Airport Winter Dinner!

We’re back at Fergusson Winery on Saturday 29 June for another fantastic night of great food, wine and conversation of just about every type.

There’s more news to come on this in the next couple of days. For the time being, get this in your diary and start booking now. You can book and pay through either Lilydale Flying Club or through Lilydale Flying School. More details on payment option also to follow.

This is always a fantastic evening and there’s no reason why we won’t make it another brilliant night this year.

All the details you need to know are in the flyer below.

Note: there are two ways to get yourself on the list.

Firstly, you can book and pay at Lilydale Flying School. See Bronni Bowen or any of the staff, who can see you right.

Secondly, you can book through Lilydale Flying Club with an e-mail to Steve Hitchen (hitchy@iinet.net.au). In this case, you will be given bank account details to transfer payment to and you will be asked to forward the transaction receipt to Steve.

To register, click on the link below and fill in your details. You will be then given the banking details. Please copy the receipt and e-mail it to Steve Hitchen.

Named after a club stalwart and one of the founding committee members, The Marjy Grosvenor Award will recognise one member who has contributed to the club above what would normally be expected.

It will be presented annually at the Winter Dinner.

The aim of the award is to encourage members to participate in LFC activities and help the club grow. It can be awarded to someone who has put in significant time and energy, or to someone for one particular act or idea that enhances the club’s reputation or contributes to the advancement of the club or aviation as a whole.

Nominations would be called for from the membership base. Any ordinary member or committee member is eligible, but self-nomination is not allowed. The Chairman/President/Co-ordinator is not eligible to win. Only financial members are eligible for the award. Nominees need not be pilots.

Download the criteria and nomination form using the links below. Nominations are now open, and will close on 8 June 2019.

Who do you think deserves the first Marjy Grosvenor Award?

Seven aeroplanes from Lilydale carrying 14 people made the trip down to Bunurong Field at Inverloch last Sunday 27 January for a BBQ fly-in. It seemed others had the same idea, and around 30 aeroplanes and about 60 people showed up for a snag, hamburger and some very nice home-baked cakery. Bunurong is good, wide airport run by local man Michael Malone and home to his Cessna 182. It is also the home of the local RC club the Inverloch Flyers who suspended ops for the day and pitched in with the BBQ. Lilydale’s strong showing was matched by Peninsula Aero Club from Tyabb, who fronted up with a couple of Yaks and a CJ6, two Foxbats and a nice Beech 33. Three Lilydale aircraft flew in formation all the way from home to Bunurong, arriving over the top in vic before going to line astern for the pitch in to downwind runway 27. A bit of a fun arrival. 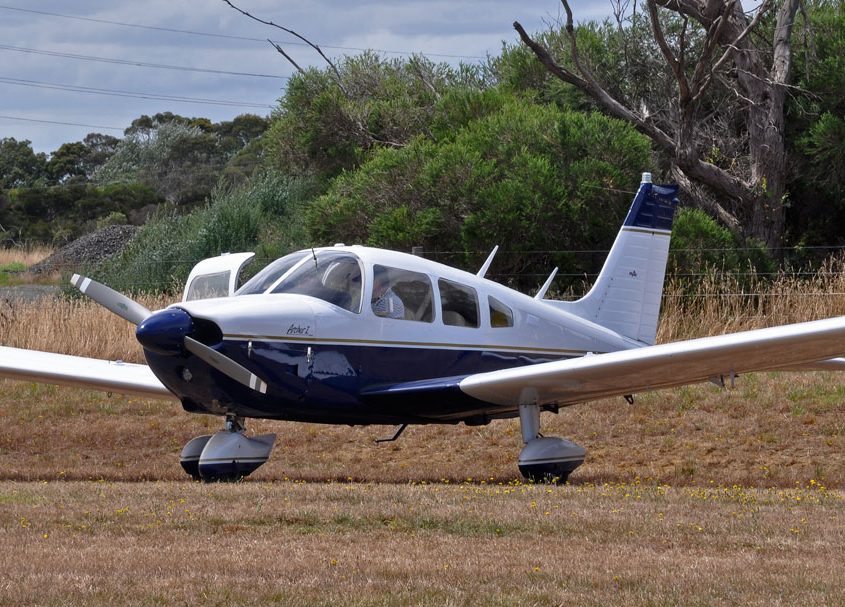 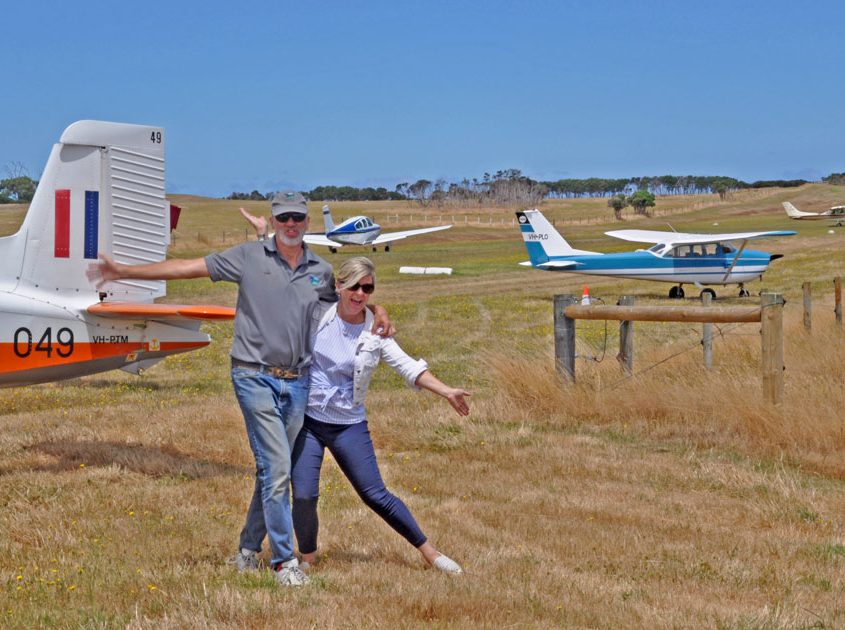 LFC’s club shrinking violets Tony and Angela photobomb as Jock taxis to the holding point in the background. 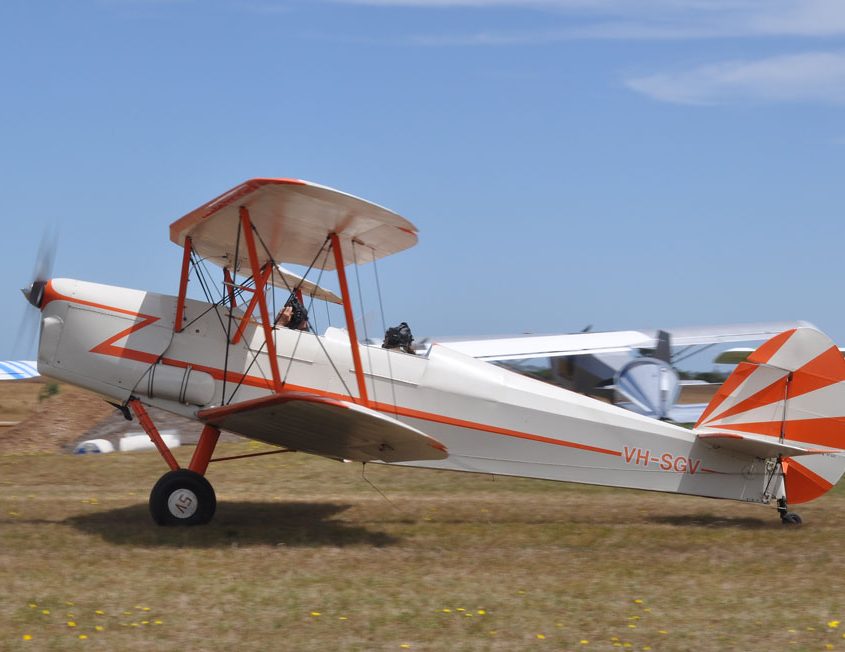 This Stampe and a Tiger Moth ran joyflights from Bunurong Field over the picturesque Andersons Inlet. 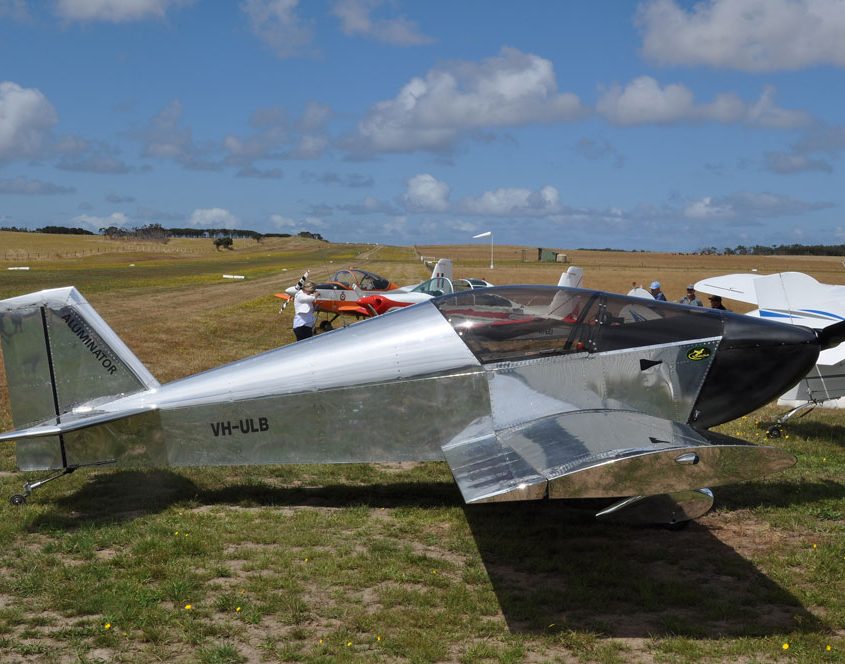 Sonex Aluminator shone in the sun. 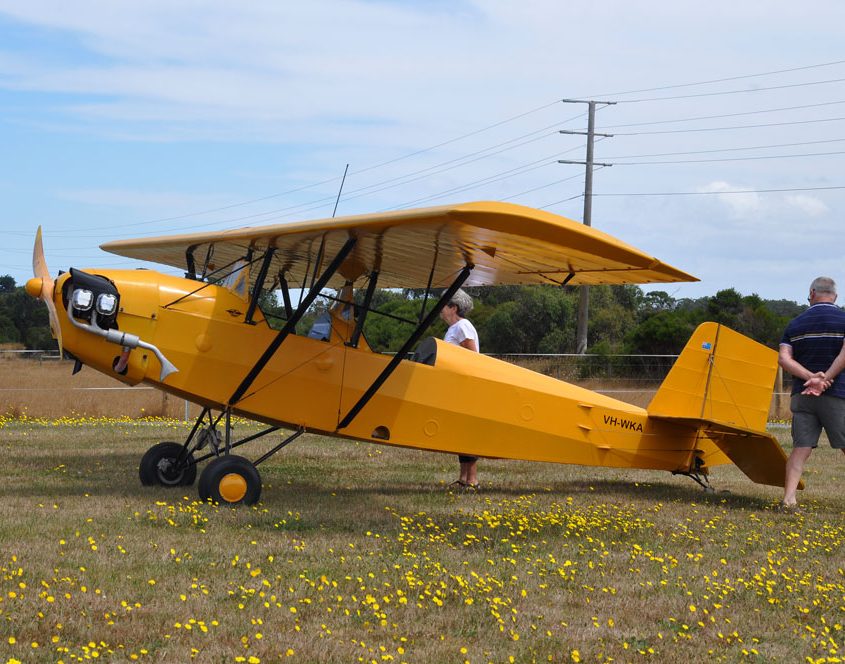 This Pietenpol Camper was one of the more curious aircraft parked at Bunurong. 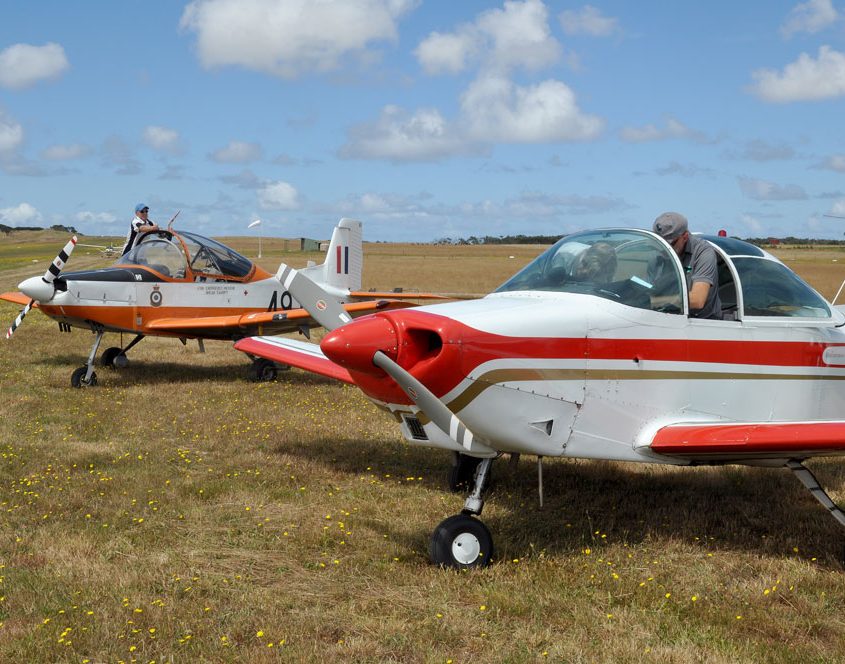 Mango and Ecky after a formation arrival. 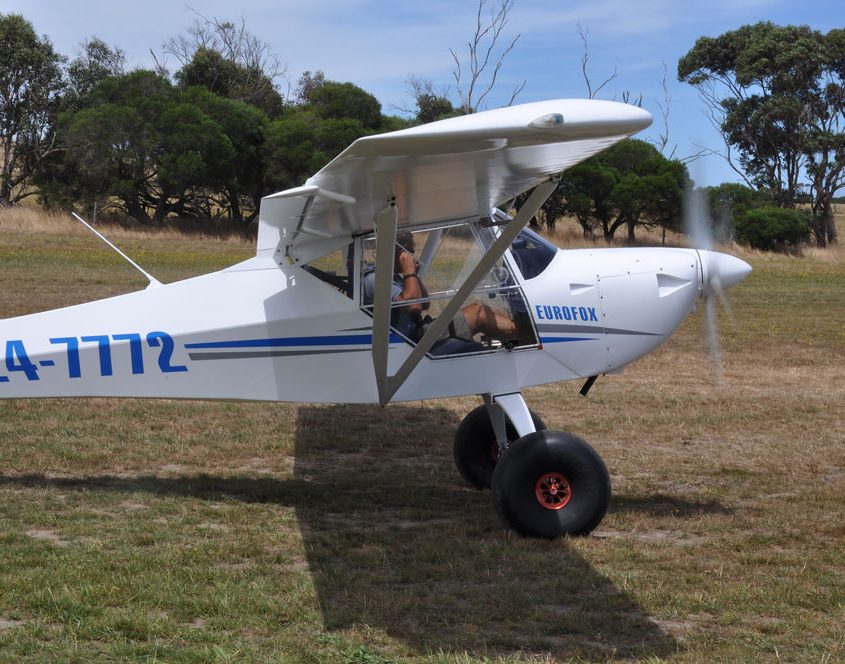 This former Lilydale resident caught the eyes of LFC members. 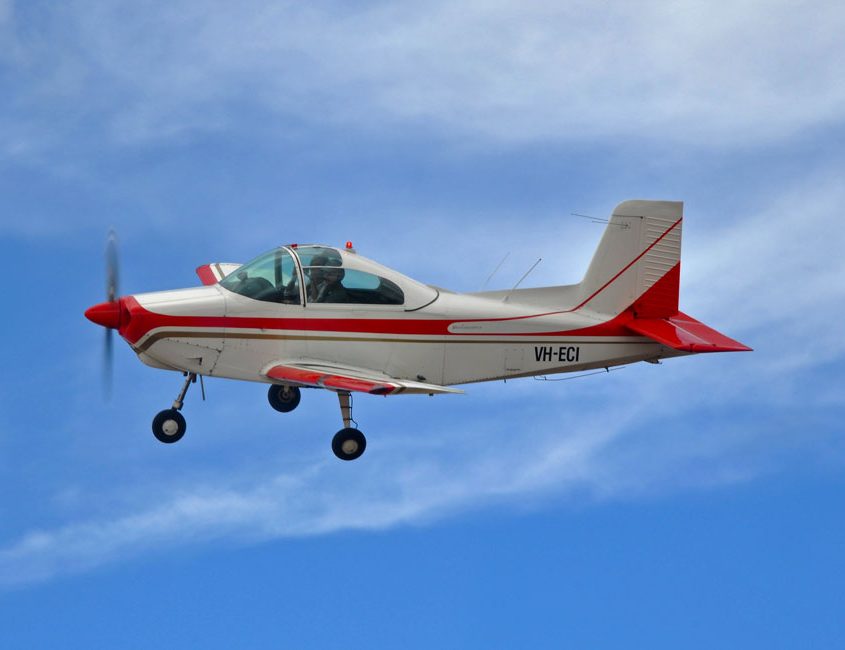 Tony and Angela off the wing of CT4 “Mango” during the trip to Inverloch. 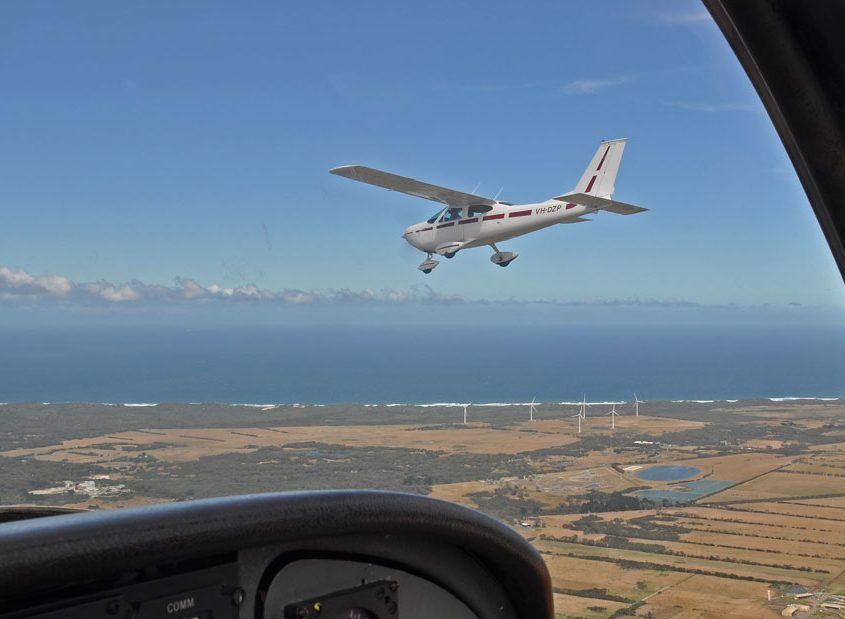 Dizzy leads them in as the formation wheels east over Wonthaggi. 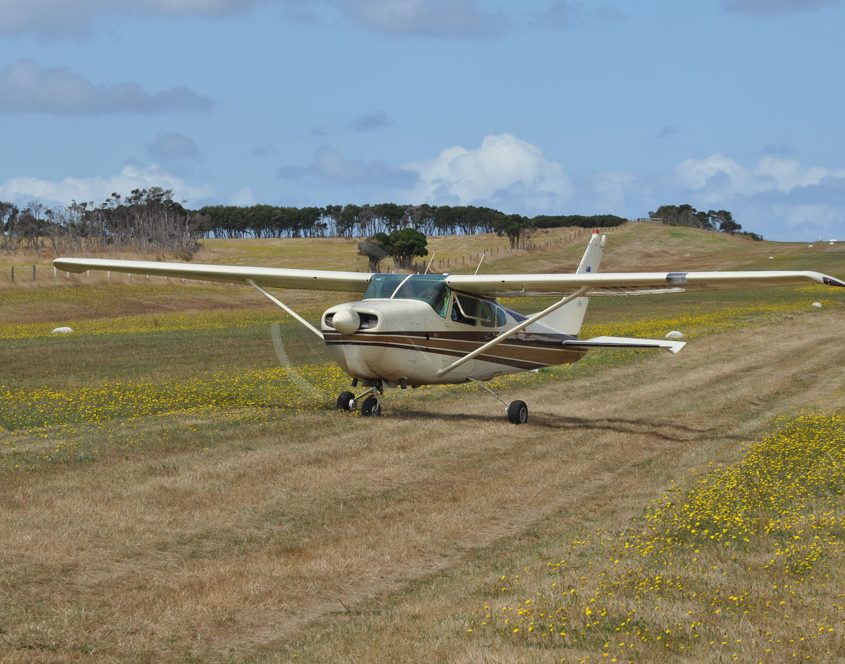 A nice old C210. Note this is a very early model with the struts. 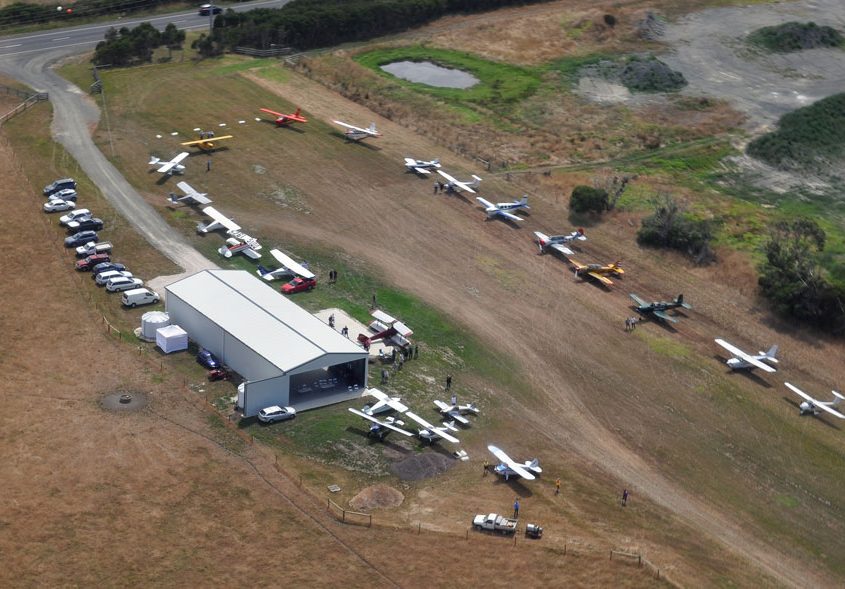 The gathering at Bunurong as the LFC formation rolls over head. If you look closely you can see Jock’s Bonanza and Doug’s Pipistrel. 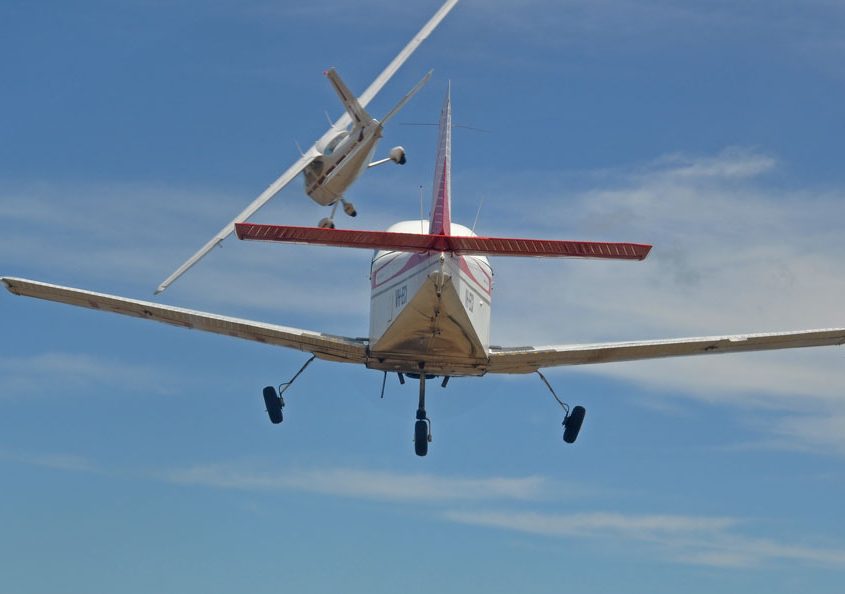 Bob and Linda break overhead to pitch into crosswind as Tony and Angela in ECI wait their turn.

The LFC contingent was:

C172 NAY – Jenny and a visitor from Canberra Aero Club